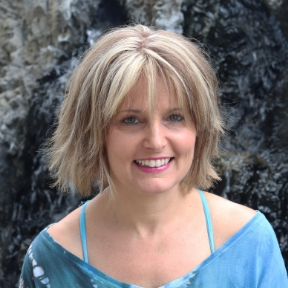 Susan Mondi Bowen founded the studio in 2005 and has instructed yoga, stress reduction and meditation for nearly 20 years and lived a healthy lifestyle for more than 30 years.Susan became a boutique fitness and wellness entrepreneur by creating Thrive Yoga after several life events made it clear that her professional trajectory was successful but her life was lacking freedom and vitality. Thrive Yoga received a lot of press and media attention in 2005 due to the uniqueness of a yoga center in the DMV.  Susan was also given accolades for her business acumen and was awarded seed money for Thrive through the StartRight! Women’s Business Plan Competition.

Susan has received awards as a business leader in Maryland including awards in leadership, entrepreneurship and community giving by: City of Rockville, Rockville Economic Development (REDI), and has been awarded runner-up Entrepreneur of the Year 2017 through the Maryland Women’s Business Center.

Susan’s personal story of creating Thrive Yoga has been featured in The Washington Post; The Gazette; WUSA News and other various local newspapers and TV news.

Susan’s broad experience, sense of humor and natural charisma is represented in her classes via technical alignment instruction;  creative sequence variations;  latest research on being human and playful storytelling. 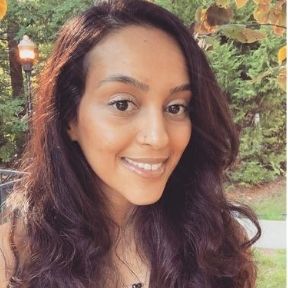 Yasmin began practicing yoga poses (asana) during her teenage years while practicing Taekwondo; her instructor would incorporate yoga poses in her training. Years later, while living alone in college, she joined a yoga studio to cure her loneliness. Little did she realize it would become her life passion. Yasmin has spent her life pursuing personal liberation. Yoga has enabled her to build a meaningful relationship with herself, and it has shown her that freedom can be found within.

Yasmin is now a 200-hour certified yoga teacher. She received her training at Thrive Yoga in Rockville, Maryland. She is currently enrolled in the 300-hour program to dive deeper into her liberation journey and share her experience with others to become more aware of their inner light and love. She is also an environmental biologist. She received her Master of Science from Hood College in Frederick, Maryland, where she bolstered her studies with a devoted home yoga practice.

In her classes, Yasmin hopes to awaken your inner healer. As Yung Pueblo puts it: “True power is living the realization that you are your own healer, hero, and leader.” She does this by infusing her classes with love and empowerment. She hopes to provide you with a well-rounded Yoga practice. Her classes emphasize alignment, mobility, and presence. 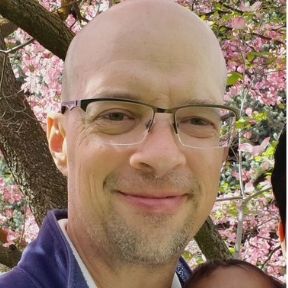 Yoga Alliance E-RYT 500, NAMA Certified Ayurveda Practitioner, NCBTMB Board Certified Bodywork and Massage Therapist, Sanskrit, and Yoga Philosophy Teacher. Pierre is the founder and director of Santosha School.  He began training in natural health care in 1992, working full time in the field in 2000; and has instructed at more than 100 schools in the US, Mexico, and Canada, including the Ayurvedic Institute.

Pierre does his very best to make a spiritual living, which can seem difficult and esoteric; instead, it became simple, loving, and practical.  He is working to create a 4-year degree in natural health care so that young people may someday have a real profession in it. 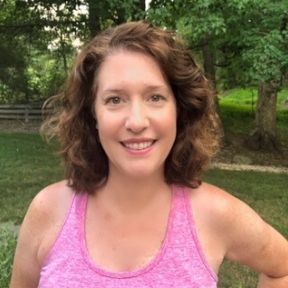 Lauren has been practicing yoga for more than 15 years; she completed her RYT200 hour teacher training at Thrive Yoga studio in Rockville, MD, in 2016 and RYT 300 hour teacher training at Thrive in 2020. She incorporates Thai Yoga Massage and Reiki practice into many of her classes for a deeply relaxing and rejuvenating practice. Her Yin and Restorative classes will leave you feeling cared for physically and mentally. Students comment that her classes are very nurturing and calm.

In addition to being a yoga teacher, Lauren is a nurse practitioner and a certified pediatric mental health provider. She currently works at Children’s National Medical Center in the department of Neurology. In addition to treating many neurologic conditions, Lauren specializes in working with teens with anxiety, Attention Deficit Hyperactivity Disorder, and Tourette syndrome. Her extensive background in neurology and anatomy has been an asset to her yoga teaching.

Lauren hopes that her teaching will allow you to explore a new relationship with yourself that supports you on and off the mat!

Hippocrates said it best: “The natural healing force within each of us is the greatest force in getting well.” 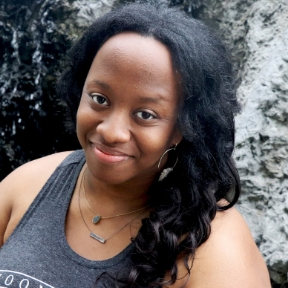 Ugonma (E-RYT200; YACEP) is currently pursuing E-RYT500 at Thrive. Ugonma is the Thrive Yoga Studio Director. Along with the rest of the team, Ugonma creates the programs and events at Thrive. She has studied/ taught Vinyasa Flow and Kundalini styles of yoga for over 10 years. She is a teacher and forever a student of yoga. Ugonma is a Teacher Trainer at Thrive and Reiki Master/Teacher. She leads Reiki Trainings and yoga classes for non-profit organizations, NIH, and Children’s Hospital. Her work has been featured at holistic health fairs, conferences, and wellness centers on the East and West Coasts.  She continues to develop her specialty in energetic wellness through integrating earth-based and meditative practices into her yoga journey. She believes yoga is a path to self-transformation, peace, and joy. 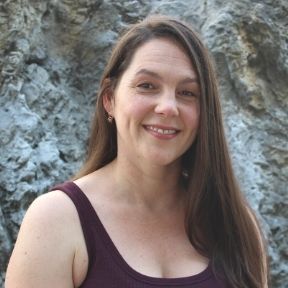 Daniele Lorio (RYT 200) walked out of her first yoga class 14 years ago, and the elation she felt told her that yoga was a practice meant for her.  Daniele comes from a home steeped in the visual arts and, at 15, went to conservatory for classical voice and later opera. After many years of rigorous preparation, regimentation, and riding the emotional roller coaster of a performing artist, she finds solace, clarity, and acceptance on the mat.

In Daniele’s class, her students’ inner wisdom is honored in practice. She endeavors to create a space that is both physically and emotionally safe for her students. As a singer, Daniele has used her body and voice as a tool to create bonds between people and to help move listeners through music. Yoga, too, is an instrument by which we may grow together and help one another to realize a kinder world.

In Daniele’s classes, you can expect to move, build strength, get to know yourself, and smile. 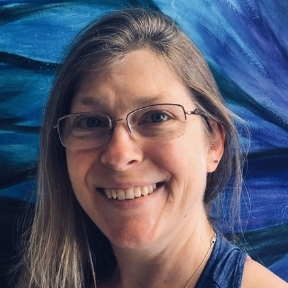 Lyana (RYT200) was introduced to yoga while preparing for a home birth 18 years ago. Intrigued by the ease this physical practice (asanas) brought to her body, and how the deeper underlying philosophies aligned with her own journey, Lyana practiced yoga intermittently for many years.

Three years ago, she walked into Thrive Yoga and has been committed to a regular yoga practice ever since. The sanctuary of the space and inclusive welcoming and the “live what you teach” style of Thrive staff became a warm part of Lyana’s extended community. Inspired by the exceptional teaching — the philosophies lived and shared by thoughtfully selected teachers — and the incredible gifts they share with students, Lyana went through the Thrive teacher training program’s transformative journey.

In her Hatha classes, Lyana hopes to highlight for you the subtle, empowering stability you possess, bring ease into your body through movement and breath, and inspire you to embrace who you are in every moment — on and off the mat. With a genuine interest in your overall experience, Lyana’s goal is to share with you concepts and techniques that will continue to serve you in your life.

Lyana has also been a homeschool mom—dedicated to well-rounded experiential learning; singer/songwriter and performer; a marketing and branding specialist; luxury jewelry handcrafter; freelance writer, and author. She loves hiking in nature with friends, her partner, and the family dog; forest bathing; cycling; reading perspective-broadening books; burning yummy-smelling scents, and meditating.

As a life-long teacher, Felicia’s (RYT500; E-RYT 200) passion for teaching and learning shines through in all of her classes, workshops, and progressive series. She is an advanced yoga practitioner who is able to make students feel welcome and at ease. She is highly involved in teacher development and mentoring, and is a Teacher Trainer at Thrive. Felicia teaches hot vinyasa and core vinyasa classes and loves breaking things down for beginners in vinyasa flow. She has a popular following in workshops such as arm balances, inversions, and deep explorations of intermediate to advanced yoga poses. She understands the importance of balance, inner peace, and revitalization, and has even gotten many students at the studio knitting — discovering the meditative properties of her other favorite passion! Felicia’s classes are highly energetic and provide direct instruction, authenticity, and fun! Felicia took her first yoga class in 2006 and immediately found what she was looking for—a physical challenge, a spiritual comfort, and relaxing aftereffects. She knew she had to share this with others, and enrolled and completed her 200- and 300-hour training programs at Thrive. She has been teaching exclusively at Thrive since 2009. 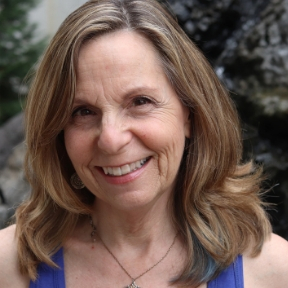 Jane (E-RYT 200; RYT500) has trained at Duke University’s Integrative Yoga for Seniors, Brain Longevity® Therapy Training offered by the Alzheimer’s Research and Prevention Foundation, and is a member of the International Association of Yoga Therapists (IAYT). In 2012 she founded Sarasvate, Yoga Designed for the Brain, whose mission is to help prevent Alzheimer’s. Jane is also a Teacher Trainer at Thrive. Jane enjoys giving students the ability to align in a pose and connect to how it feels in their body and breath. Her teaching style is challenging but accessible to all — with an emphasis on alignment and compassion for the body. She tries to reach students right where they are. Her classes include hands-on assists to help with realignment and are experiential, incorporating music, gongs, singing bowls, writings, yogic concepts, and themes. Her mother introduced her to yoga and meditation as a kid, and that in and of itself is special for her.  She’s continued to practice yoga her entire life. Still, it wasn’t until she found Thrive that she really integrated yoga into her life, starting with the 40-day program, then teacher training, and through the many wonderful workshops offered at Thrive. She knew she felt the impact of yoga on her life when her friends and family noticed the changes that she had felt. Jane is here to pay it forward and share. 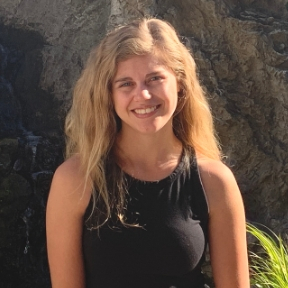 Lydia (RYT500) is a yoga teacher, reiki practitioner, and breath coach from rural Maryland. She leads Vinyasa and Hatha style classes intending to create a warm environment where you may freely explore your practice on and off the mat. Lydia was drawn to yoga from the moment she stepped into a studio. Through mindful movement and awareness, she developed a loving relationship with her body and discovered the deeper internal benefits of yoga.

Compelled to share this powerful practice with the world, Lydia began teaching yoga and fitness classes in 2015. She went on to complete her 200-hour teacher training at Asheville Yoga Center in 2017, became a certified Group Fitness Instructor through ACE in 2018, and graduated from her 300-hour training at Thrive Yoga in 2020.

Lydia is also driven by her awe of nature. Through yoga practices, she aims to reunite each one of us with our natural, animal, authentic self. She believes that when we care for ourselves as beings of this earth, we will better care for each other and the planet. This deeper connection with nature gifts us with compassion for ourselves and others and a feeling of being home.

In her classes, Lydia hopes you will experience the joy of movement, the vitality of your breath, and the peace of presence. On your mat, you will find a deeper understanding and love for your body and your self. That relationship will stay with you as you step off of your mat and into the world.